I bought a Keyboardio Atreus a few months ago, and overall I’ve been quite happy with it. I purchased the bare-bones version (no switches or key caps) and got Kailh Silent Box Brown switches (from Keyboardio) as well as a set of blank, Cherry profile key caps. I also threw in Keyboardio’s switch and key cap pullers. Including shipping, I paid $190 for all of it. 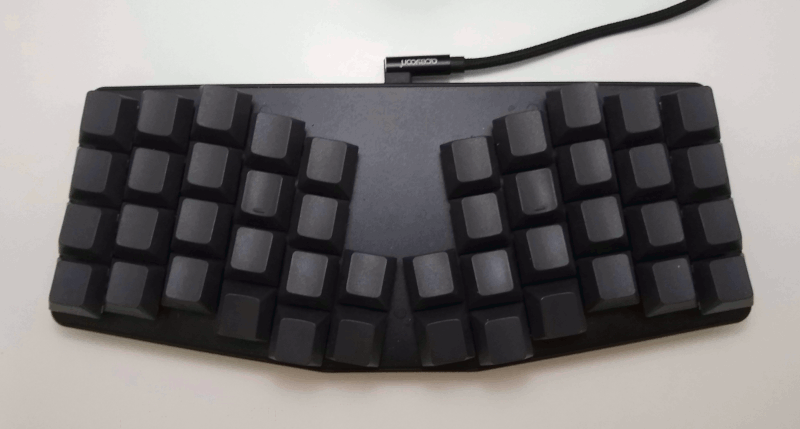 I think it makes sense to start my review of an enthusiast keyboard by saying that I’m not terribly experienced with enthusiast keyboards. For most of my life, I’ve used regular cheap-o membrane keyboards – whatever was provided with my computer, really. Then a couple of years ago, I became more aware of the importance of ergonomics and started using a Microsoft Natural Ergonomic 4000, a very affordable split, tented keyboard. At the beginning of this year, I bought a Kinesis Freestyle Pro, my first ever mechanical keyboard, with Cherry MX Brown switches. The Freestyle Pro introduced me to the power of customizing a keyboard, and from there I decided to go all in on customization with the Atreus.

Why I picked the Atreus

I never used the default layout, so I can’t really tell you anything about it. I also have no experience with Keyboardio’s key caps as I bought mine elsewhere.

Is it worth it?

Yes, definitely yes. Most of my gripes about the Atreus are compromises that I have to make in order to get the portability I want; the price tag is significantly less than other pre-built, ergonomic, ultra-customizable keyboards that I looked at (e.g., the Moonlander); and the good parts are really great. I’m happy with my purchase and enjoy typing on it every day!